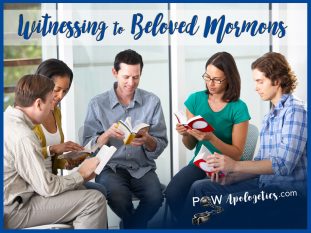 The first time Mormons came to my front door, my body trembled from embarrassment—imperceptibly, I hope. I didn’t know what to say to the two young men wearing white shirts and black pants. Though I grieved over their eternal destiny, I was not prepared to witness to them.

As they presented their opening appeal, I did recall some of the facts I had learned in the Cults course I took in my Christian grad school.

This pseudo-Christian cult unknowingly promotes a false version of Christianity.1 The founders changed the Bible’s message by adding their “sacred writings” to it. And although Mormons use Bible terms, they’ve redefined them so their meanings are quite different. As the saying goes…  “Mormons use the same vocabulary but a different dictionary!”2  Thus, God’s people and other non-Mormons need to know that in conversations with Mormons, this creates communication barriers and a susceptibility to false teaching.

For example, it is a common misconception that Mormons follow the Jesus revealed in the Bible. But according to Mormonism, Jesus was once a mere man who worked his way up to godhood before coming to earth. In contrast, the Bible teaches that Jesus is God incarnate—almighty God who humbled Himself and came to earth in human flesh (the second Person of the Trinity). Since faith is only as valid as the object of our faith, people need to trust in the biblical Jesus for their salvation.

A Witnessing Approach I Learned from the Pulpit

For several months on Sunday mornings, my pastor (also an outstanding radio apologist) taught the book of Hebrews to the congregation.3 When he reached chapter 7—which emphasizes the superiority of the priesthood of Jesus Christ—he paused to interject an effective way to witness to Mormons.

Pastor Brian explained that years ago, while studying his Bible, he realized that the truths in Hebrews chapter 7 actually cause the platform of Mormonism to collapse. Since then, he has pointed out those clear passages in various conversations with Mormons, and none of them offered a countering reply.

How to Share with Mormons Two False Claims of Mormonism

Contending earnestly for the faith, once for all delivered to the saints (Jude 3).

As redeemed men and women who are called to promote biblical Christianity, let’s consider pointing out those powerful verses in Hebrews to the Mormons we encounter. Hopefully, upon hearing the theological contradictions to their beliefs, some of them will reexamine their religious system. And let’s remember to speak the truth in love—recognizing that although we’re anti-Mormonism theologically, we surely aren’t anti-Mormons.

Let’s also invite God into our witnessing equation through prayer. For example, we could lift up to heaven on their behalf this salvation petition: that the Holy Spirit will remove the spiritual veil from their eyes so they can grasp the gospel of grace (2 Cor. 4:3–4) and come to know the biblical Jesus Christ forever.

Then more beloved “spiritual POWs” will advance to the cross.