(A Second Letter of Warning to Someone Ready to Embrace Reiki) 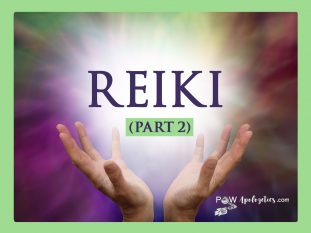 As pointed out in Part 1, Reiki (ray’-kee) is on the rise in America and is deceiving people into believing it’s a helpful healing art. Developed by a Japanese Buddhist monk, this New Age system of “energy healing” is luring countless people into dabbling in the occult. And even some “Christians.”

The focus of Part 1 was a friendly letter of warning that could be sent to anyone considering the practice of Reiki. Using a similar letter, I reached out to my friend [a.k.a. “Shannon”] who was in spiritual jeopardy. After reading it, she discovered an article promoting Reiki to Christians—especially those with limited understanding of Bible Scripture. So I wrote a second letter explaining why Reiki clashes loudly with biblical Christianity.

Below is a generic version of my second letter. Consider customizing it to help others make an informed decision regarding this slippery issue. As Christian apologist Marcia Montenegro points out in her article “REIKI: Healing with the Force,”1 the practice of Reiki can ensnare people with its Eastern/occult philosophies.  (Thankfully, Shannon is no longer pursuing Reiki, and for that I’m praising God.)

[A hypothetical letter explaining why Christians need to avoid Reiki:]

I’m happy to hear you looked over the info I sent you about risky aspects of Reiki based on the biblical perspective. I was concerned about your pursuing it without hearing both sides of the issue. One definition of love, I believe, is the willingness to warn others when necessary, e.g., for their protection or their great good. It’s kind of like holding up a U-turn sign that says, “Danger! Cliff Ahead!”

Today I read the “Reiki for Christians” article you found, which aims to attract Christians.  Since it’s quite problematic, I decided that even if my whole schedule got backed up, I needed to take time to shed more light on Reiki for you. So I delved into the subject more deeply.

Actually, the more I research Reiki, the more I uncover its dark side. For example, when proponents of Reiki describe it as a healing art, they neglect to point out the mystical New Age part of it. For example, it’s characterized in a general sense as a method of stress reduction and relaxation that also promotes healing. On the other hand, Marcia Montenegro aptly states that “Reiki is nothing more than ‘energy healing’ as is done in witchcraft and pagan religions.”2

I’d like to point out some of the misleading statements in the “Reiki for Christians” article.

This online Reiki article3 saddened me as I read it, since New Age philosophies and practices, including Reiki, clash loudly with Christianity. Not only do they present opposing worldviews, but Scripture clearly forbids occultic practices (see Deuteronomy 18:9–12 and Acts 19:11–20). Our magnificent God revealed in His Word that such activities are disgraceful to Him. Even so, Reiki can deceive Christians who are unaware of these two strategies of the “Enemy of our souls”: Satan can transform himself into an angel of light, and his followers can transform themselves into ministers of righteousness (2 Corinthians 11:14–15).

Here are a few responses:

Next, here’s a word picture I came up with, to explain more clearly the invisible spiritual conflict.

(An adaptation of Pilgrim’s Progress by John Bunyan)

A young woman named Juliana was on a long journey home, traveling on foot. Before she set out, a friend warned her to walk straight home and not enter “The Enchanted Land.” That’s because if she did, a heavy drowsiness would overcome her, eventually making it impossible to get back on course and reach her desired destination.

But here’s the thing! Another friend had given Juliana the opposite advice. He encouraged her to visit “The Enchanted Land” on her trip home. And although the place sounded a bit mysterious, it promised wonderful benefits for herself and potentially many others. Plus, she could still make it home on time.

Juliana trekked along and soon spotted a large attractive sign saying, “The Enchanted Land.” As she stood at the fork in the road, the enticement to enter was strong. She needed to make the right decision.

Should she turn left or right? Which friend’s advice should she take? Should she go on in and find out for herself what it was all about? Certainly both friends couldn’t be right. Juliana continued to ponder ….

So, here’s the life application: All people will face a fork in the road and must make the correct choice, so as to end up at the desired destination (heaven). Our time is limited, and the stakes are high. And some of our friends know the truth about ultimate spiritual matters, yet others do not.

Hopefully, “Juliana” will realize that the Bible is the source of all truth and will follow Jesus Christ and His teachings. After all, the evidence for the truth of Christianity is like a mountain that towers over all religions and religious philosophies. And logically, all religions cannot be true because they contradict each other in their main beliefs.

Two such areas of solid evidence for the Christian faith are: (1) The historical resurrection of Jesus from the dead (seen by hundreds of eyewitnesses) demonstrates that Jesus Christ is the Son of God, the risen Savior, and (2) The Old Testament, which contains three hundred messianic prophecies fulfilled centuries later by Jesus Christ (in the first century AD), establishes that He is the long-awaited Messiah.

Next, let’s consider the meaning of “true Christians.”

Whether someone is a true Christian doesn’t depend so much on their denominational affiliation. That’s because it’s not about which local church we belong to, but whether we’re in the Kingdom of God. We’re in His Kingdom if we have a personal relationship with Jesus Christ—who’s God in human form (John 1:14). For we read in Romans 10:9 that, “if you confess with your mouth the Lord Jesus and believe in your heart that God has raised Him from the dead, you will be saved.”

The Christian Gospel is radical and personal, and it changes hearts! After Jesus resurrected from the dead, He declared, “I am the way, the truth, and the life, and no one comes to the Father except through Me” (John 14:6; 1 Timothy 3:16). With open arms of love, the Savior of the world longs for people to know that He’s already paid the price for our salvation—by sacrificing Himself on the cross for each of us, to settle the “sin issue” on our behalf.

And Jesus is actually only a prayer away—one heartfelt prayer away. (A suggested prayer of salvation appears in the Gospel tract enclosed in my first letter to you.5) Amazingly, at the moment someone says a prayer like that, he (or she) begins a loving relationship with the Lord of heaven, which lasts forever!

Lastly, I’d like to focus on Jesus Christ and His healing miracles.

In response to the crazy assertion made by some Reiki proponents that Jesus used Reiki, Marcia Montenegro clarifies who the Jesus of Scripture is:

Jesus, being God the Son, did not need a technique, but healed because His nature was the same as God’s … and God is the Healer and Giver of life (Genesis 1 and 2; Psalm 103:1–3, 147:3; Hosea 6:1; Matthew 4:23…. Jesus’ miracles of healing were not just to cure, however, but were a sign that He was the promised Messiah. … It is His authority over illness that Christ gave the disciples, not a secret teaching or technique. … Jesus’ healing magnified the glory of God. … Jesus practiced healing and saving from sin together.6

Thus, Reiki and Christianity are irreconcilable. In fact, Sharon Fish (I quoted her in my first letter) concludes her article on “healing energy”7 with this eye-opening statement:

Therapeutic Touch [including the related practice of Reiki] is not a practice Christians can engage in without seriously compromising their faith and potentially endangering their relationship with God. He alone can teach the true meaning of the laying-on of hands to comfort, care, and cure.

So, in conclusion, [name of friend], if you’d like to meet me for coffee sometime and discuss this, I’d love to. Or maybe we could set up a “Q & A” time for Bible questions. Or I’d love to do a small-booklet Bible study with you. For example, you could pick one of these titles: “Friendship with God” or “Follow Me!” or “The Incomparable Jesus.”8 Just let me know. Again, my cell phone is ____________.

1In this article (christiananswersforthenewage.org/Articles_Reiki1.html), Marcia Montenegro explains that Reiki healing methods are interwoven with spiritual philosophies that point to pantheism, not to the God of the Bible. 2An excerpt from Marcia Montenegro’s email to me on 8/8/18. 3“Reiki for Christians” (christianreiki.org). 4A Bible-teaching article (gotquestions.org/laying-on-of-hands.html). 5The letter contained in Part 1 of this Reiki blog contained three enclosures: a gospel tract, an apologetics brief on pain and suffering, and an apologetic-devotional book (all are posted at TrueWayTracts.com). 6See Marcia’s 4-part Reiki article cited in footnote 1. 7“Therapeutic Touch” by Sharon Fish, published by CRI (equip.org/article/therapeutic-touch). 8Three Bible study booklets, Willow Creek Resources (Zondervan, 1992).