THE HOUSE OF SALVATION 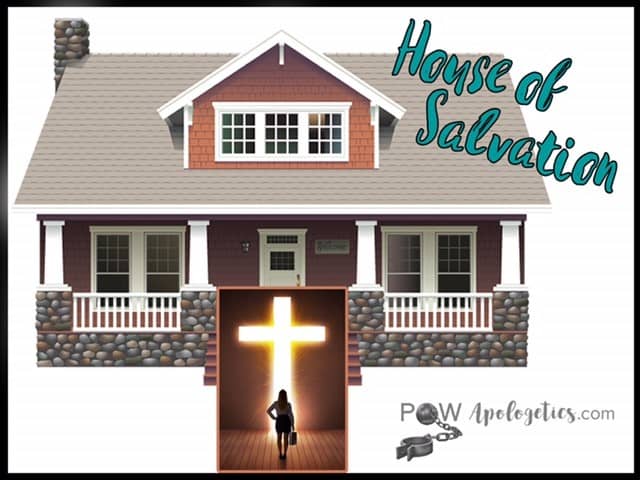 The role of the Christian apologist—which brings both challenges and rewards—is to promote the gospel and defend the faith. We address unbelievers’ theological questions and misconceptions, facilitating their search for truth by helping them advance toward the cross.

One effective way to explain how evangelism and apologetics fit together is through an impactful illustration called the “house of salvation.” It was developed by Dr. John Warwick Montgomery (one of the foremost professors of apologetics today) in his Sensible Christianity lecture series.1

Apologetics Is a Branch of Evangelism

After defining apologetics as “a species of evangelism,” Dr. Montgomery explains:

Christian apologetics deals with the honest intellectual hurdles that block people from coming to the cross of Christ. Think of the road of salvation as a road that has various kinds of potholes and obstructions in it. And our task is to move people along the road of salvation up to the house of salvation, so they’ll enter inside.2

Potholes, Pitfalls, and Obstacles in the Road

The various obstructions in the road to salvation are intended to trip up unbelievers in their spiritual journey. Considering the spiritual battle that’s going on for the destiny of people’s souls, it is no surprise that there are traps along the way to the cross. Our Enemy creates strategic stumbling blocks to prevent and detour people from reaching the house of eternal salvation.

Apologists attempt to clear the pathway so unbelievers (or “spiritual POWs,” as I like to call them) can proceed toward meeting their Savior. Sometimes we patch potholes by clarifying spiritual misconceptions. Other times we remove obstacles by answering questions—whether theologically, evidentially, or scripturally. Yet other times we erect ladders to help captives caught in cults and false religions to climb out of pitfalls.

Dr. Montgomery goes on to say that we must not let an unbeliever sit down by the side of that road of salvation and stop moving, citing the excuse that there are “legitimate intellectual objections to the faith that preclude his continuing.” Christians are called to share the gospel and apologetics so we can graciously help “stuck people” get back on course (see 1 Peter 3:15).

Many of those “sideliners” sitting along the road to salvation face intellectual difficulties. One of them might say, “My valid objection is…,” or, “I heard from a highly credible source that…,” or, “There’s absolutely no evidence that… .”  In response, an apologist could offer satisfactory answers on the spot or agree to research the matter and return with a “lifeline.” Since truth is on the side of biblical Christianity, there will always be good evidence to provide or good argumentation to present.

One such “sideliner” dealing with an emotional hang-up once told me, “I realize there’s plenty of rational evidence for Christianity, but it scares the bageebees out of me to think there’s a God of judgment who has a list of every mistake I’ve ever made and sin I’ve ever committed in life.” My encouraging response was “Get this! All those bageebees will disappear if you receive Jesus Christ as your Savior because you’ll be immediately cleansed and eternally forgiven!”

To the credit of Christian apologists, rather than ignoring these “sideliners” with misguided beliefs, they are “concerned about the non-Christians around them who are constantly presenting problems that need to be dealt with.”3

Entering the Grand House of Salvation

In John 14:2, Jesus comforted His disciples with these words: “In My Father’s house are many mansions. … I go to prepare a place for you.” The magnificent house of salvation, which represents God’s eternal family, is filled with God’s love and presence. It is also God’s glorious place of rescue for precious souls heading toward “the everlasting fire prepared for the devil and his angels” (Matt. 25:41).

In C. S. Lewis’s final book in the Narnia Chronicles, The Last Battle, he depicts the end of the world of Narnia. In the conclusion, a miraculous porthole to safety appears. It’s a stable that paradoxically is bigger on the inside than it is on the outside. It appears small and dingy from the outside, but when the children enter through the door, they find themselves in a beautiful grassy country that spreads as far as they can see in every direction.4 It turns out to be the real and timeless Narnia where Aslan lives. The implication is that when people enter God’s house of salvation, they will discover that the glorious place where God and His family live stretches on forever.

Every other house to which unbelievers are heading will inevitably tumble, crumble, and burn to the ground. It is worth our time and effort, as Christians, to engage in compelling conversations that lead to proclaiming the gospel of grace—and defending the faith when applicable.

When we invest in people’s spiritual future, it will bring the highest-yielding returns there could ever be.