THE DAY OF DISCOVERY 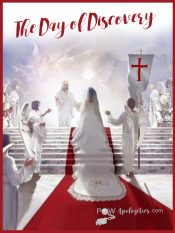 The clear-as-a-bell pastor’s message rang loudly in my heart—resonating spiritual truth. “We are saved by grace and not by works,” he pronounced, leaning against a tall pillar in the corner of a gymnasium with Bible in hand. Even the worship chorus (Jesus paid it all, all to Him I owe) resounded the theme.1

I glanced around at the other fifty or so people seated around me in the high school gym. Most seemed fully engaged. But how could this message—truly the most important one in the world—be delivered to just pockets of people? It needed to be broadcasted everywhere!

At the end of the service, the pastor invited people to receive Jesus Christ. Although I wanted to do it, I hesitated because countering thoughts entered my mind. I wondered if it were true, as many people claim, that Christianity is too exclusive and that all roads lead to God, not just one. Should I examine all the other religions before making a choice?

No longer able to sit still, I rose from my bleacher bench to pray with the pastor. I didn’t care that people were staring at me. I bowed my head and surrendered my heart to the Savior-King who died for me.

When I opened my eyes, what I saw surprised me. Instead of being in that high school gym, I found myself standing in an endless line of unfamiliar people. Men, women, and children with expressions of anticipation slowly advanced, single file, toward something. Where am I? And what’s at the front of the line? Am I dreaming?

I turned to the woman behind me and asked what was happening.

My body quivered. With each step forward, I could hear Jesus’ voice with more clarity. Soon I saw the figure standing at the front of the line, aglow and robed in white garments, emitting pure love. Muted music surrounded Him.

Since my turn was coming up quick, I considered moving backward so I could process things. I heard the gentleman who had reached the front of the line say, “Lord, I bring to You my record. I served the homeless for three years in a row.” After a pause, two heavenly ushers showed him to the group on the left. The “goats.”

The next man in line stepped up. “Lord, I bring You my record. I served as an elder in my church for seven years.” He too was escorted to the left.

A woman stepped up next. “Lord, I bring You my record,” she began. “I’ve attended church since I was a teenager, and I have been a very good person.” The ushers directed her to the left as well.

A child approached. She gulped. “Jesus, I don’t have any record to show You, but I believe in You.” Wearing a royal crown, the Lord smiled and leaned forward, handing her a small gift box tied with a red ribbon. She was escorted to the group on the right. The “sheep.”

I was stunned to see that people who had served the Lord for years could not make it into heaven. Then I remembered something Pastor Mark had taught—just a blink of time earlier in the gym. We cannot add anything to what Jesus did on the cross for us. Our salvation is based on His grace alone. And if we could add anything by our own righteousness (our own good actions), then Jesus died in vain (Gal. 2:21).

My turn came to see Jesus face-to-face. I beheld the King of heaven—divine love personified—and He looked at me with loving eyes. Before I could utter a single word, He said, “My daughter, you placed your trust in Me, and you chose to travel the only road that leads to life. Now, go join the group on the right and enter heaven’s gates!”

Beautiful bells chimed softly in the distance. I looked down and noticed I was wearing a lovely white gown.

As I walked over to take my place, my knees nearly caved in, but my heart rejoiced beyond measure. I had only one regret: not telling more people while I was on earth about God’s saving grace … the only highway to heaven … and the inevitable Day of Discovery.

As everyday apologists, how can we deal with objections to Christianity’s exclusivity and thereby help unbelievers advance to the cross and live?

Many people resist Christianity because the Bible teaches that Jesus is the only way to heaven (John 14:6)—and that view of truth can seem narrow-minded and/or arrogant to them. Others object to the exclusivity of the Christian faith because it claims that salvation can only be attained by God’s grace, through faith (Eph. 2:8–9).2 And that view clashes with man’s natural notion (deep, universal intuition) that we need to earn our way to heaven through some form of “works righteousness”—attempts to be a good person. Tragically, therefore, many people enter counterfeit religious roads that lead to eternal destruction.

First of all, we might point out to unbelievers that it was Jesus Himself who declared, “I am the way, the truth, and the life. No one comes to the Father except through Me” (John 14:6). That means that we, as Jesus’ followers, are not narrow-minded radicals, but are His messengers of religious truth (see Acts 4:12). In one sense, however, we can agree that Christians are “narrow-minded,” since Jesus lovingly warned people that the road to heaven is narrow, not wide, and few will find it (Matt. 7:13–14).

While the only-one-way-to-heaven passages in the Bible may seem arrogant, Christianity is the most humble faith there is because Christians must believe that getting to heaven is not by any human efforts. We can’t even add anything to what Jesus did on the cross for us!

Here’s a point of logic we could ask unbelievers to consider: Actually, all roads cannot lead to God because the major religions all contradict each other in their core beliefs. For example, how could God be both personal and impersonal at the same time? Or be both knowable and unknowable? And how could there be only one God (monotheism) and also multiple gods (polytheism)?

Then which religion, if any, is true? To answer this question, we could share the compelling evidence for the resurrection of Jesus Christ.3 It is the top Christian apologetic—the unmatched miracle—because no other “religious founder” physically rose from the dead and is living today. By His crucifixion and resurrection, Jesus conquered sin and death for each of us and established the truth of His deity, His Lordship. He even predicted His death and resurrection multiple times! (e.g., see Matt. 12:39–40; 16:21). (My next blog will present evidence for the resurrection using conversational apologetics.)

According to the New Testament (which both secular and religious historians have validated as primary-source documents from the first century), on the third day after Jesus’ death and burial, He returned to life. For the next forty days, He presented Himself alive “by many infallible proofs … and [spoke] of the things pertaining to the kingdom of God” (Acts 1:3). Then as His disciples watched, Jesus ascended into heaven bodily (v. 9).

The sinless Son of God was the only one qualified to purchase our eternal salvation, thereby paving the only viable road to heaven for us. And since no other “religious leader” ever traveled to heaven and returned to teach us about it, we’d be wise to listen exclusively to His words of life.

1 From the chorus of the 1865 hymn by Elvina M. Hall, “Jesus Paid It All” (Public Domain). 2 “The basic question of the Bible is: How can a sinful man be accepted by a holy God? Amazingly, God provided a way that He could remain just and sinners could be let into heaven.” Dr. Rod Rosenbladt, Apologetics Professor and Lutheran scholar, KWVE radio broadcast aired on 10-18-17, (http://www.haventoday.org/series/five-solas-500/). 3 A classic book presenting the historical evidence for the resurrection is The Son Rises by William Lane Craig (Wipf & Stock Publishers, 2000).