(His Valuable Contribution to “Juridical” or Legal Apologetics) 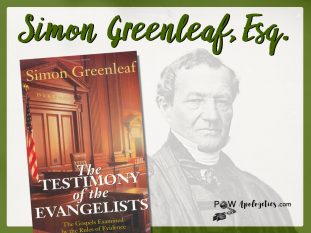 s a Harvard Law professor and attorney at law, Simon Greenleaf (1783–1853) is acclaimed for his lasting impact on American jurisprudence through his three-volume legal masterpiece, A Treatise on the Law of Evidence. But that’s not all! As a Christian apologist, he is well known for his valuable contribution in developing “juridical” or legal apologetics.1

Through his timeless and influential work The Testimony of the Four Evangelists (first published in 1874), Greenleaf applied the legal rules of evidence—as administered in courts of justice—to the Bible’s four Gospel accounts.2 Through skillful cross-examination of the written testimonies of Matthew, Mark, Luke, and John, Greenleaf demonstrated why they would be rendered acceptable in a court of law. And his assessment “stands as firm today as it did when he first delivered it.”3

The original publication also included a significant section called “Harmony of the Gospels,” which chronologically reconciled the four testimonies and addressed alleged discrepancies. It is available today online.4

“Let the Four Evangelists Be Tried”

In The Testimony of the Four Evangelists, the basis of Greenleaf’s detailed study was this: Let the evangelists (Matthew, Mark, Luke, and John) be tried by five tests to discover if they are credible witnesses of the teachings of Jesus Christ.

Greenleaf concluded that the four Gospels were, in fact, trustworthy and authoritative historical accounts. At the end of his examination (in §48), he wrote this:

“Either the men of Galilee were men of superlative wisdom, and extensive knowledge and experience, and of deeper skill in the arts of deception than any and all others, before or after them, or they have truly stated the astonishing things which they saw and heard.”

Based on his overall study of apologetics, Greenleaf wrote these words regarding the Bible’s authenticity (from correspondence with the American Bible Society in Cambridge, Nov. 6, 1852):6

“Of the Divine character of the Bible, I think no man who deals honestly with his own mind and heart can entertain a reasonable doubt. For myself, I must say, that having for many years made the evidences of Christianity the subject of close study, the result has been a firm and increasing conviction of the authenticity and plenary inspiration of the Bible. It is indeed the Word of God.”

Plenary inspiration is the view that all parts of Scripture are God-breathed or divinely authoritative.

Based on the juridical approach to apologetics advanced by Simon Greenleaf, let’s consider two concepts that everyday apologists might present today when defending the truths of the Christian faith.7 Below are two hypothetical questions posed by unbelievers, followed by responses.

Question: I’ve been studying the four Gospel accounts, and I’ve noticed they contain some inconsistent details. Doesn’t that serve to discredit the Bible?

Response: No, it doesn’t. The existence of minor differences in the four accounts actually supports the credibility of the Gospel writers and the Bible. It indicates there had been no collusion. Had their accounts contained identical details throughout, it would reveal that a conspiracy had taken place to alter the truth.

Simon Greenleaf made that weighty point. He was the acclaimed Royall Professor of Law at Harvard in the mid-1800s. After he examined the Gospels by the legal rules of evidence, he wrote: “There is enough of [circumstantial] discrepancy to show that there could have been no previous concert [collusion] among them, and at the same time such substantial agreement as to show that they all were independent narrators of the same great transaction, as the events actually occurred.”8

Question: I have discovered a significant discrepancy in the Gospel accounts. How many angels appeared at the tomb? Was it one angel (according to Mark 16:5) or two angels (according to Luke 24:4)?

Response:  This isn’t a discrepancy. Many so-called discrepancies in Bible Scriptures can easily be harmonized using logic. Lawyers use this principle in litigation, for example, when trying to reconcile statements made by witnesses. So here’s a harmonization of the passages in question (Matt. 28:2; Mark 16:5; Luke 24:4; and John 20:1–2, 12):

An angel of the Lord moved the stone and was sitting upon it outside (Matt. 28:2). The two men in dazzling apparel (in Luke 24:4) were angels (John 20:12). Although Mark 16:5 refers to only one angel at the tomb (who’s sitting on the right side), logically if there were two angels at the tomb, then there was at least one angel. Therefore, we see that there was one angel outside and two on the inside of the tomb.9

Harmonization: To harmonize, is to make or become harmonious. Another given meaning is to collate parallel narratives (Dictionary.com definition).

Simon Greenleaf’s grand apologetic works, and quotes, continue to inspire Christians to earnestly contend for the faith that was delivered to the saints once for all time (Jude 3). To some extent, some of us might even employ “juridical” apologetics in our own ministries. For the attorney-professor-apologist’s legal arguments, which shaped the discussion on Christianity in days past, can also be an effective tool in the hands of apologists today.

1 A “juridical” approach to apologetics adopts legal principles of evidence as the methodological basis for verifying the Christian truth claims (Faith Has Its Reasons, Boa and Bowman (IVP Books, 2006), chap. X (https://bible.org/series/faith-has-its-reasons). 2 Simon Greenleaf, The Testimony of the Evangelists: The Gospels Examined by the Rules of Evidence (Kregel Classics, 1995). 3 John Warwick Montgomery, The Law Above the Law (NRP Books, 2015) 12. https://shop.1517legacy.com/products/the-law-above-the-law. 4 Greenleaf’s section on “Harmony of the Gospels” is accessible online  at: http://www.tektonics.org/harmonize/greenharmony.htm. 5 Greenleaf, 31. 6 Stephen A. Northrop, D.D., A Cloud of Witnesses (American Heritage Ministries, 1987), 198. 7 See Montgomery, 87-88. (“Concretely, here are some fundamental principles of the law of evidence, which, if applied to the question of the factual truth of Christianity, will yield most significant results”: the ancient documents rule, the parol evidence rule, the hearsay rule, the related cross-examination principle.) 8 Greenleaf, 34. 9 “How Many Men or Angels Appeared at the Tomb?” (https://carm.org/how-many-men-or-angels-appeared-tomb).10 For a detailed discussion, go to: https://www.gotquestions.org/Judas-die.html.

LEGAL APOLOGETICS BY DR. JOHN WARWICK MONTGOMERY TODAY:  Influenced by Simon Greenleaf, Dr. Montgomery (lawyer, apologist, historian, theologian) is today’s leading advocate of juridical apologetics for the historic Christian faith. His new edition of The Law Above the Law (cited in endnote 3) contains Greenleaf’s essay TOTE “republished as an appendix (after carefully correcting the typographical errors of the earlier editions.)” p. 12. See also his classic juridical work Defending the Gospel in Legal Style (Wipf and Stock 2017), https://wipfandstock.com/defending-the-gospel-in-legal-style.html. (The theme of this collection of essays is “that law needs good theology and theology needs the evidential perspective of the law.”) Dr. Montgomery is the author of more than 60 books in six languages, and he holds eleven earned degrees. Most of his works are available at www.1517legacy.com, www.WipfandStock.com, or Amazon.