PROOF IN THE PUDDING 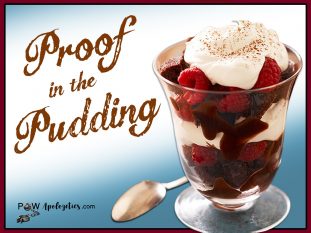 While riding to dinner with family members, my grandson Nicky and I sat in the back seat of the car, joking and laughing. The school year had just ended, and I flew out to Colorado to see Nicky graduate from eighth grade at Southeast Christian School.

The two of us overheard someone in the front seat say, “The proof is in the pudding!” With widened eyes and raised eyebrows, Nicky retorted, “So, what could pudding prove? And what flavor is the pudding?” That got us all chuckling.

After regaining a bit of composure, I explained how that idiomatic phrase could be used.

“Nicky, let’s say you were on a basketball team, and your coach gave your team a two-hour lecture on how to perfect your layup shots. But his words weren’t followed up by any actions. Now let’s say your coach took the team onto the basketball court, demonstrated a solid layup, then let you guys try it out. If your shots improved, you could say “the proof was in the pudding” because the players tried it for themselves (tasted it) and the technique proved helpful.”

My point made, the two of us explored other figures of speech, like “Don’t spill the beans” and “Johnny on the spot.”

After our family dinner at a barbecue restaurant, Nicky and I returned to the back seat of the car for the ride home. This time I started up a more serious conversation.

“Hey, Nicky, could I ask you a spiritual-type question?”

“Great! So, let’s say you know a neighbor kid named Zack who’s an unbeliever. How would you answer him if he asked you this: ‘If Jesus and Christianity are really true, then why aren’t more people in the world Christians?’”

Instead of the pause of silence I expected, Nicky blurted out a few excellent responses.

“Well, many people are taught that the big bang theory is a scientific fact, so they believe in evolution and don’t become Christians. And atheism snags a lot of people—especially those who are angry at God for something. Other people just want to keep their freedoms and not make any religious commitments.

After a short pause, Nicky identified one more category. “And then there are unbelievers who want to check things out for themselves and not spill the pudding!”

We burst out laughing.

“Do you mean spill the beans or the spill the pudding?” I added.

We just laughed harder. I think the two of us had the best seats in the car! But seriously, I think Nicky’s last point was, that some people want to “taste” various religious systems and then decide for themselves—not realizing that people’s opinions cannot change who God is.

Discussing More Apologetics with My Grandson

Nicky’s right-on points surprised me. “Those are excellent answers,” I told him. “I’m impressed! Maybe that’s why Jesus declared many times, ‘He who has ears to hear, let him hear.’”

“I guess so. Because if more people listened to Jesus’ words, they’d realize they needed Him as their Savior.”

“Hey, Nick, if you had the chance, you could also share with Zack that there’s a mountain of evidence for the truth of Christianity. Like, did you know there’s proof from history that Jesus rose from the dead?”

“Yep. My Bible says that after Jesus died, He appeared to His apostles again and proved in many ways that He was actually alive.1

“You’re right!” I exclaimed. “Hey, can you think of one of those proofs?”

“Well, hundreds of witnesses saw Jesus after His resurrection,” he said. “Even five hundred people at one time!”

“Yes, I think those eyewitnesses are found in 1 Corinthians.2 Woo-hoo, Nicky, that’s powerful proof in the pudding! It is considered ‘internal evidence’ for the truth of Christianity because it’s documented in the New Testament.” I smiled and continued. “Now, can you think of a ‘pudding taster,’ someone who became a believer after challenging the Bible and testing its teachings?”

We had just enough time to discuss two examples of credible people with strong testimonies, Lee Strobel and Josh McDowell. These former skeptics seriously examined the evidence for Christianity, eventually gave their lives to Christ, and today are famous defenders of the faith.

When we all pulled into the garage, Nicky jumped out of the car and ran into the house for dessert. We didn’t have any pudding to eat. But strawberry-swirl ice cream was a fine substitute.

My deep-dish dessert was reflecting on the fact that my grandson had given his life to Christ one summer at Camp Idrahaje in Colorado … and that he’s getting trained up in the ways of the Lord (Prov. 22:6).3 Now I’m praying that Nicky will continue to grow in his faith and become a torch carrier for Christ in his generation. That would be “sweeeet”!

In today’s increasingly skeptical world, kids need to come to the place where they own their own faith. Our goal as parents, grandparents, and caregivers is to support, encourage, and influence them by our own godly Christian walk. Discussing apologetics with them, especially conversationally, is also beneficial. For it can help them advance to the cross, or strengthen their existing faith, and/or prepare them to offer rational reasons for the truth of Christianity to unbelievers.

In a recent issue of Christianity Today, apologist Melissa Cain Travis lists six excellent ways to inspire “confident, contagious faith” in kids: 1) Start early, 2) Educate, don’t indoctrinate, 3) Use a conversational approach, 4) Explain other worldviews, 5) Don’t freak out about doubt, and 6) Lean on the Holy Spirit and others around you.

Inspiring our youth toward faith in Jesus Christ is a high calling, so let’s become intentional in our efforts to do so. Then countless kids will “taste and see that the Lord is good”5 and enthrone Him on their hearts as Savior and Lord.