(Witnessing to an Articulate Homeless Man) 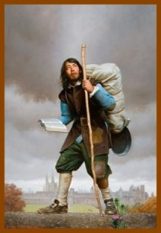 On a chilly-windy afternoon, a well-groomed homeless man carrying two beefy backpacks (one in front and one in back) passed us rapidly. My friend Joanie and I had just prayed for a “divine appointment”—someone ready to hear us share about Jesus Christ.

Instead of trying to catch up with the backpacker, we bowed our heads briefly and asked the Lord to bring him back across our path, if that was His plan. Sure enough, when we turned a corner next to Barnes & Noble, guess who was holding the door open.

“Your backpack reminds me of a book,” I said with a smile. “Have you ever read Pilgrim’s Progress?”

“No,” he replied. “Would you ladies like to enter first? I’m trying to go inside.” Joanie joked, “But, we can’t get out of your way until we find out if you’re going to heaven!”

“I’m an agnostic.” He stepped away from the door so he could talk to us beside a brick pillar, out of the direct wind. “I’m going in here to read books by Darwin and Dawkins.”

I was amazed afresh at God’s direction and timing. Joanie and I introduced ourselves, and he told us his name was Jonathan.

“We just can’t know if there’s a God,” Jonathan said. “And no one was there in the beginning to confirm whether life began with a big bang or not.”

I agreed with his second statement, then asked if I could share the two “big bangs” found in the Bible. He nodded with a detectable smile. First I cited Genesis 1:1, “In the beginning, God created the heavens and the earth” (bang!) and then Luke 2:11, “For there is born to you this day in the city of David a Savior, who is Christ the Lord” (boom!).

The three of us conversed for about twenty minutes. Jonathan was articulate and kind, and I silently prayed that God would lift the spiritual veil from his eyes (2 Cor. 4:3–4).

A few years ago (he told us) he became a derailed Catholic, angry at abusive priests. Interestingly, his son was a Christian minister who led the college group at a local university.

When Jonathan told us he was into facts and science, I offered, “Well you know, there are many scientists who are Christians!” He graciously acknowledged my point. So, I proceeded to share some apologetics.

“Did you know that Jesus was a real person who lived in the first century? Historians verify that He was crucified in the year 33 AD. And Jesus fulfilled 300 prophecies from the ancient Hebrew Scriptures that told of a coming Messiah. What amazes me the most, though, is that Jesus rose from the dead on the third day after his death and burial! And hundreds of eyewitnesses saw Jesus before and after His resurrection.”

My friend and I listened as Jonathan talked awhile about Darwin and Dawkins. Joanie suggested, “But those books were written by man… You need to read the book that God wrote! The Holy Spirit was the divine Author of the Bible.” She added, “And Marilyn and I know Jesus…we know Him personally.” I nodded in agreement.

Joanie then shared the powerful message of what Jesus did on the cross for us (see Rom. 1:16). I added that it took me years to understand that John 3:16 meant that Jesus Christ died not only collectively for all people, but also personally for me and my sins. Oh, how I felt indebted to my Savior.

Before we parted, Jonathan asked if he could take our picture on his small camera, and we said yes. He showed us some of his prized photos, and we left him with two Scriptures to consider—John 1:1 and John 14:6.

As he headed into Barnes & Noble, I said with a smile in my voice, “You know, they have Bibles in there you can read!” Jonathan’s last words were, “I think I’ll look for a New King James Bible.”

Wow, only God could change his reading goal so quickly from Darwin and Dawkins to God’s holy Word!

After Joanie and I left the store, we prayed for Jonathan to hear God’s voice as he read the Bible. And that he would follow in the footsteps of the main character in Pilgrim’s Progress, by laying down his “backpack of burdens” at the cross (Luke 4:18).

If he does so, his sins will be forgiven … his load will be emptied … and he will progress as a pilgrim to the Celestial City.

An update: About three months later, I encountered Jonathan again, sitting on a bench near Barnes & Noble. He was carrying one backpack instead of two, and we talked a while. He was surprised that I had remembered his  name, and he told me that his son had been promoted to “pastor.” When I left, I gave him a gospel tract in my wallet, titled “Why Become Born Again?” So today I’d like to ask you, my Blog-Friends, if you’ll lift up a prayer for Jonathan and his salvation. I’d love to introduce him to you someday, perhaps while walking together along the street of gold (Rev. 21:21).