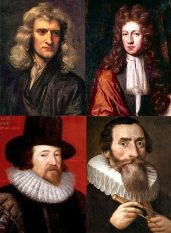 In this guest blog-interview, I am pleased to introduce Jessica (Shaver) Renshaw. Jessica is an award-winning journalist, as well as a blogger, apologist, and the author of eight books including Gianna: Aborted…and Lived to Tell About It (Tyndale House). I asked Jessica to tell us about her latest blog series on Christian/Scientists, her blog ministry, and her fascinating background.

TYNER: I’m sure many Christian apologists would enjoy reading your latest blog series dealing with numerous scientists who are (or were) Christians or theists. Could you give us a heads up about it?

RENSHAW: Sure. My latest series of posts is “God and Scientists — 20th and 21st Centuries.”

TYNER: What is the general flavor or style of your blog ministry? And how can we access your blog site?

RENSHAW: Now I publish articles on Christian perspectives and Christian evidences on my blog hiddeninjesus.wordpress.com. I am particularly interested in the overwhelming evidence for Intelligent Design.

Then I think I will follow that series, or rather expand it, to embrace evidence from specific disciplines like astronomy, biology and archeology: about pulsars and whales (Louie Giglio), starlings (John 10:10 Project), and the remains of Egyptian chariots and army discovered at the bottom of the sea—but not where archeologists had originally been looking.

The John 10:10 Project https://thejohn1010project.com/ provides great short documentaries to use in evangelism, and I hope to post more of those. My husband and I are big fans of C. S. Lewis, so eventually I will post blogs concerning his life and works. (Actually, Lewis couldn’t see why Americans were always making a fuss over him. But we love the big questions he articulates for us and the way he cuts through sophisticated jargon to translate the answers into words we can understand.)

TYNER: I know some of your fascinating background. Could you share a recap, including how God led you into professional writing?

RENSHAW:  I was born into a family of secular humanist intellectuals and writers. My father, Earle Reynolds, had earned a doctorate in physical anthropology from the University of Chicago and was thoroughly grounded in and committed to evolution. He taught at the notoriously secular Antioch College. Of all the intense family discussions my parents, two brothers, and I enjoyed on philosophical, political, social, and other issues, evolution wasn’t even on the radar as a controversial topic.

My family of origin spent six years in Japan. People ask, “Oh, were you missionaries?” No. (My dad was studying the effects of radiation on children who survived Hiroshima.) In fact, I was a mission field! In 1964 I was attending a bilingual university in Tokyo. I was excelling in school, had many friends—but inside I was lost and miserable, searching for meaning and peace. I was impressed by the joy and integrity of a group of fellow students, whom I knew were Christians, and I asked one of them to take me to his church. (I thought that is where I would find the secret to their joy—and as it turned out, I did!)

There in a Chinese church in Japan, an American missionary with TEAM led me to Jesus Christ using the Four Spiritual Laws. It was an international effort! I dropped out of college to fly to the States and enroll in her alma mater, Multnomah School of the Bible in Portland, OR (now Multnomah University) where I obtained a ThB degree. The Greek I learned there has been really helpful, and one of my favorite courses was Christian Evidences.

Since then, I love using evidence from all the sciences, and from every part of life, that points to the existence of God. I had op-ed articles on Intelligent Design published in major metropolitan newspapers across the country including The Los Angeles Times. An article I wrote about teaching creation with evolution for the Orange County Register, “Berkeley Alumni Evolve a Standard of Scientific Openness,” won an Amy Writing Award—but that was a while ago (and under my first married name, Jessica Shaver).

TYNER: One last question…. You mentioned that, for you, apologetics leads right into worship. What is an example of that?

RENSHAW:  This morning I re-read some of the quotes by Christian/scientists and what a kick-start for my devotions! I was really blessed! Then I went to Philippians 2:5-8 about Jesus setting aside His glory. I’ve been going through my former professor Dr. John’s Mitchell’s commentary, “Let’s Revel in Philippians http://dickbohrerbooks.com/page2.html. I came to Dr. Mitchell’s juxtaposition of Isaiah 6:1-5 where Isaiah sees the Lord with John 12:41 identifying that Lord as Jesus: “Isaiah spoke of Jesus when he saw Him in His glory!”

I don’t remember seeing before this clear statement that Jesus is the One Isaiah saw on the throne, high and lifted up. Jesus is the One of whom the seraphim were crying out “Holy! Holy! Holy! is the Lord of hosts.” It was the glory of Jesus that filled the whole earth, knocking Isaiah to the ground in fearful awe, exclaiming “Woe is me… for I have seen the King!”

Another building block of evidence that Jesus is the King, the Lord, the object of angels’ worship in the Old Testament!