DID JESUS RISE FROM THE DEAD?

(An Apologetics Brief: The Case for Jesus’s Resurrection) 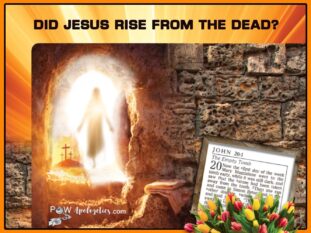 Did Jesus return to life on the third day after His death on the cross, just as He predicted to His disciples?1 The answer to this question is of infinite importance. If it’s true, then Jesus’s resurrection—the supreme miracle—sets Christianity apart from all religious systems.2

The Bible teaches that Jesus opened the door to heaven for all who will follow Him as their Savior. He declared, “I am the resurrection and the life. He who believes in Me, though he may die, he shall live.”3 If the Bible is the revealed Word of God (see compelling evidence below), we would be wise to consider its extraordinary claims that:

• Jesus conquered sin and death by His miraculous resurrection.4
• Jesus demonstrated He was the unique Son of God by His victory over death.5
• Jesus offers everyone the free gift of eternal life.6
• We can enjoy a relationship with the living God through His Son, Jesus.7

DEFINITION OF “RESURRECTION”
The resurrection refers to “the return of Christ to bodily life on the earth on the third day after His death.”8 In His physical resurrected body, He appeared to hundreds of witnesses for 40 days before He was taken up into heaven.9 Today He is exalted at the right hand of God the Father.

RESURRECTION vs. RESUSCITATION
When a person is revived or resuscitated, he returns to this earthly life temporarily but will die again. In contrast, when someone is resurrected, he rises in a new, eternal body not subject to death or decay.10

I. THE NEW TESTAMENT

Historians have authenticated the New Testament (NT) documents on the basis of accepted principles of historical method (bibliographic, internal, and external evidence). These documents are regarded as reliable sources of information from the first century. They are “primary source evidence” of the life and claims of Christ.11 They contain eyewitness reports from the original apostles, who:

• walked and talked with Jesus for 3-1/2 years and physically touched Him12
• witnessed Jesus’s death and resurrection13
• told the enduring, miraculous story for which they labored and suffered.14

All four Gospel accounts refer to the empty tomb on the third day after Jesus was crucified and buried. And no naturalistic theory has provided a plausible explanation.

(1) Security precautions at the tomb failed. Heavy security was set up to ensure that Jesus’s body would remain in the tomb, including an enormous stone covering the entrance and a Roman guard unit.15 (2) Two apostles discovered Jesus’s undisturbed graveclothes in the tomb. Peter and John ran to the tomb and saw that the empty body wrappings, enmeshed with embalming spices, had retained their original head and body shape.16 (3) No early Jewish writings refuted the empty tomb. Instead, the Jewish records presumed that Jesus’s tomb was empty.17 (4) Contemporary scholarship has rejected the anti-supernatural theories. One such passé theory even claimed that the hundreds of eyewitnesses hallucinated all at the same time.18 (5) The stolen body claim is unfounded. The Roman and Jewish leaders would have no motive for stealing the corpse of Jesus. The disciples didn’t have the motive or means to take the body, nor would they benefit from locating a dead Messiah.19

The NT documents record appearances of Jesus during the forty-day period between His resurrection and ascension.

JESUS APPEARED REPEATEDLY AFTER HIS DEATH AND RESURRECTION

(1) Jesus appeared to individuals or groups on at least twelve distinct occasions in His resurrected body:

• Mary Magdalene at the tomb20
• Mary and other women leaving the tomb21
• Simon Peter in Jerusalem22
• Two disciples on the road to Emmaus23
• Ten disciples without Thomas 24
• Eleven disciples including Thomas25
• Seven disciples fishing at Sea of Tiberias26
• All disciples at the commissioning27
• 500 brethren at one time28
• James, half-brother of Jesus29
• All apostles at Jesus’s ascension30
• Paul (Saul) on the road to Damascus.31

(2) Jesus demonstrated He was truly alive. Jesus “presented Himself alive after His suffering by many infallible proofs, being seen by [His apostles] during forty days and speaking of … the kingdom of God.”32 (3) Jesus’s resurrected form was not merely a spirit body, but physical. Jesus showed the disciples that He had flesh and bones and then invited them to touch Him. He directed Thomas to touch His death wounds. And He ate fish and honeycomb with His disciples.33

THE HEART OF THE GOSPEL
The resurrection is the heart of the gospel.34 Out of immeasurable love, Jesus came to earth to ransom us from the kingdom of darkness. The holy Lamb of God died on the cross, taking upon Himself the penalty of God’s wrath against the sins of humanity. Then He rose from the dead and lives today. He carried out God’s plan so we could know Him personally and live with Him forever.35

IS THE BIBLE GOD’S WORD?
There is no other book like the Bible. The internal, external, and bibliographical tests confirm that the Bible is the revealed Word of God—as it claims to be. Consider the hundreds of Old Testament (OT) prophecies fulfilled centuries later, the Bible’s amazing harmony and unity, its extensive manuscript support, its accurate textual transmission, the hundreds of archaeological confirmations, the wonder of the Bible’s survival, and the millions of lives over 20 centuries.36

c. THE CHURCH WAS FOUNDED
ON THE RESURRECTION

The Christian Church began 50 days after Jesus’s ascension (on the Day of Pentecost). Its central proclamation was Jesus’s resurrection.

THE RESURRECTION WAS THE ORIGINAL APOLOGETIC OF THE CHRISTIAN FAITH

(1) When Jesus died, His disciples quaked in fear of being identified with Him. Their hopes of Jesus being the long-predicted Messiah disappeared, for He was to reign forever.37 They fled after Jesus’s arrest in the garden. Some hid behind closed doors. Peter denied three times ever knowing Jesus.38 (2) Yet after the disciples encountered the risen Savior, they became fearless followers. Jesus’s miraculous resurrection proved to them His Messiahship. Even James the skeptic (Jesus’s half-brother) became a devoted disciple. And Saul the Church persecutor became the prominent apostle Paul.39 (3) On Pentecost, the Holy Spirit empowered the disciples to be bold preachers. They “turned the world upside down”40 by proclaiming the gospel of the risen Lord—despite persecution, imprisonment, and martyrdom.41 (4) The book of Acts contains the disciples’ passionate preaching about the resurrection. For example, Paul declared that “God raised Him [Jesus] from the dead” as prophesied in the OT.42 When Peter delivered his first sermon declaring the resurrection, “about 3,000 souls were added to them [the Church].”43

The Old Testament writings, authenticated by historians and highly prophetic, provide the scriptural foundation and promise of Jesus’s resurrection.44

THE MESSIAH’S BODY WOULD BE RAISED FROM THE DEAD

(1) The theme of the Bible is God’s redemption of humanity. Jesus Christ accurately fulfilled 300 OT Messianic prophecies in His life, thereby meeting the credentials of the predicted Redeemer.45 (2) The coming Messiah would not perish. According to OT Scriptures, He would pour out “His soul unto death.” Yet God the Father would not allow His Holy One (the Messiah) to see corruption.46 (3) The coming Messiah would reign in an everlasting kingdom. He would bring everlasting righteousness. He would rule from David’s throne forever. After giving up His life to bear our iniquities, God’s plan would prosper in His hand as conquering King. And He would offer an everlasting covenant.47 (4) Jesus illuminated OT resurrection passages. As a sign that He was the Son of God, Jesus likened Himself to Jonah when he was “resurrected after three days in the belly of the great fish.” He also defended the reality of the resurrection of the body by quoting the “I am” statement God spoke to Moses.48

OTHER HISTORICAL EVIDENCE
(“Extra-Biblical” Examples)
• The risen Christ has changed the course of human history by His miracles, teachings, character, fulfillment of prophecy, and claims to be God’s Son. ● The 42 authors who mentioned Jesus within 150 years of His life include secular sources as well as the early church fathers outside the NT.49 ● The noted Jewish historian Josephus recorded that Christ was condemned  to die on the cross and appeared  to His followers “alive on the third day.”50 ● Paul preserved the earliest Christian creed, containing the gospel, in his epistle (1 Cor. 15:3—4), and he likely received it within 5 years of the resurrection event.51 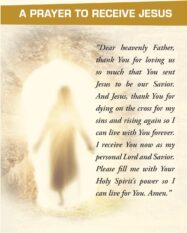 CONCLUSION: “HE IS RISEN!”

The Bible tells us that at daybreak on Sunday, Mary Magdalene and other women went to the tomb of Jesus with heavy hearts. Imagine their surprise to find an empty tomb and an angel that proclaimed to them, “Do not be afraid, for I know that you seek Jesus who was crucified. He is not here; for He is risen, as He said. Come, see the place where the Lord lay. And go quickly and tell His disciples that He is risen from the dead.” 52

The resurrection of Jesus assures us that Jesus lives today, He triumphed over death, and He has reserved for believers the gift of everlasting life in heaven.53 Even now, Jesus calls to each of us with outstretched arms, “I am He who lives, and was dead, and behold, I am alive forevermore. Amen. And I have the keys of Hades and of Death.”54 He also says, “Beloved, believe in Me and receive the priceless gift of eternal life!”

THESE 8-PANEL APOLOGETICS BRIEFS (PAMPHLETS) ARE AVAILABLE AT: 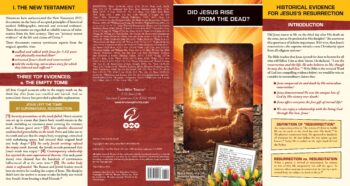 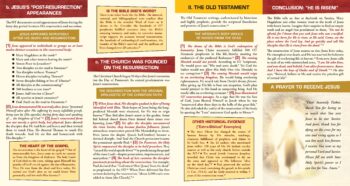