A FAMILIAR FABLE WITH A NEW APOLOGETICS SPIN 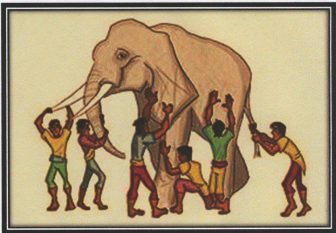 The “Six Blind Men and the Elephant” fable, originally from India, has propagated lessons or morals to the story in various contexts—from corporate employee motivation to the advancement of theological points of view.

A few years ago, I heard the distinguished Dr. Norman L. Geisler deliver an apologetics lecture,1 in which he presented a new application of this fable. It has apologetic value in defending Christianity’s claim of exclusivity—that only one road leads to God (John 14:6).

How does the scenario go?

Six blind men approached an elephant and touched it, to learn what the strange beast was like. However, since each man felt a different part of the animal, they all came to different conclusions.

What is the moral to the story?

Here are three theological lessons based on that tale, the third of which depicts spiritual truth.

1. One short-sighted (excuse my pun) application is this: Since the six men described the elephant quite differently, yet the elephant was the same, the lesson is that all religions are describing a different aspect of the same God. Therefore, all roads lead to God.

2. Another limited application is this: Since none of the men were entirely correct, all of them were ignorant of each other’s perspectives, and none had ever seen an elephant, the lesson is that the six blind men were merely babbling. Therefore, religious truth is merely speculative, and we cannot know if there are roads to God.

3. A third application conveys valid and meaningful spiritual truth. The lesson is this: Admittedly, all six blind men described the elephant incorrectly from their limited perspectives, yet the person telling the story saw the entire picture of the elephant and understood the dynamics of the situation. Therefore, spiritual truth can be known, and there is one fully truthful perspective—only one road leads to God.

Ironically, the six blind men provide us with spiritual insight regarding the one and only omniscient God.

Is there another apologetic takeaway?

When considering who that one God is, the evidence for the truth of Christianity far outweighs that of any other religion or religious system. In fact, Jesus’ radical claim to be God (e.g., in John 8:58; 14:9) was validated by His fulfillment of extensive Bible prophecy, His numerous miracles, and His supernatural resurrection from the dead.

Everyday apologists can help “spiritual POW’s” advance to the cross of Christ (where the captives get set free) by pointing out the right path, the one that leads to eternal life. The Savior of the world wants everyone to hear His words:

Therefore, unbelievers who embrace these divine words of Jesus Christ (God who came to earth in the flesh) will see more of the Big Picture He designed—and be more prepared to choose the right road.

[1] The basic illustration was given by Dr. Norman L. Geisler in his “Christianity and Culture” lecture, Veritas Apologetics Conference, Huntington Beach, CA, 2/19/11.